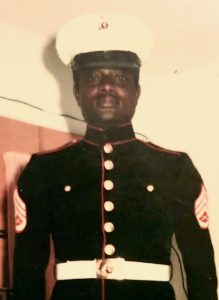 Ret. GySgt. Willie Lewis Dixon, son of the late Lewis and Annie Dixon was born October 31, 1947 in Brooks County, Georgia.  He graduated from Washington Street High School, Quitman, Georgia in 1966.  He married Willie Bell Dixon and to this union, three children were born; Anthony B. Dixon (preceded him in death, Raymond L. Dixon and Annie Maria Dixon-Manning.  He enlisted into the United States Marine Corps in 1966 and served faithfully for over 25 years, earning many accommodations before retiring.  A few of those accommodations include but are not limited to: Infantry Leader for 12 years, Purple Heart, Combat Action Ribbon, Republic of Vietnam Service Medal, Republic of Vietnam Cross of Gallantry, Good Conduct Medal and Certificate of Commendation.  After retiring from the USMC, he became employed by Lockheed Martin in Manassas, Virginia as Supervisor of Security.  He was dedicated to this career for over 20 years before retiring.

He departed this life on February 1, 2020 in Manassas, Virginia.  He leaves to mourn; his son, Raymond L. Dixon (Denise), his daughter, Annie Maria Dixon-Manning (Norris); his sister, Juanita Butler and a host of grandchildren, other relatives and friends.