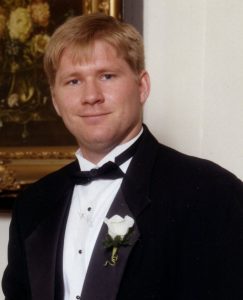 Tally Wisenbaker, III, 44, of Valdosta passed away on Friday, January 24, 2020 in Savannah following a very brief illness. He was born in Valdosta on February 11, 1975 to Tally Marcus Wisenbaker, Jr. and Carol Crook Wisenbaker. Tally graduated from Lowndes High School in 1993, where he played golf and football and was named to the All Region Second Team. He went on to graduate from Valdosta State University in 1999 with a degree in accounting. While at VSU he joined the Delta Chi Fraternity. Tally currently worked for Dame, Walker, and Hardeman Co. LLC, Accountants. He was ordained as a Deacon at First Baptist Quitman and served in many leadership roles. He loved all of God’s creation and spending time with his boys outdoors.

A graveside service for Tally was held at 11 a.m. on Monday, January 27, 2020 at Dasher Cemetery with Rev. Steve Shierling officiating. The family received friends on Sunday from 2-4 p.m. at the Carson McLane Funeral Home. Flowers will be accepted or donations may be made to the First Baptist Church of Quitman Children’s Ministry.

Condolences to the family may be conveyed online at www.McLaneCares.com. Carson McLane.