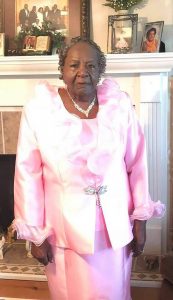 Mrs. Frankie L. Scott, the daughter of the late Mr. Virgil Lane and Mrs. Minnie Lane Wade was born on December 10, 1926 in Brooks County, Georgia.  Her five siblings Lillie Mae, Morris, Johnny, Wilma, and Julius proceeded her in death.  She received her education in Brooks County and graduated in the Class of 1945.  She attended Thomasville Technical College and completed her certification in Nurse’s Assistance program in 1975.  She was employed with the Brooks County School System, the Presbyterian Home, and the Atlanta Life Insurance company.  She became a member of the Lovejoy 246 Order of Eastern Star in 1946.  At an early age she joined Simmon Hill Missionary Baptist Church.  She was an active member and officer of the Brooks County Union and Brooks County Baptist Association.  On December 29, 1946, Frankie married the love of her life, the late Deacon Julian L. Scott, Sr.  They shared a love filled marriage for 62 years.  From their union, eight children were born, two of whom preceded her in death: Gloria Franklin and Sylvia Oates.