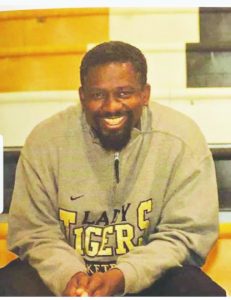 He graduated with Honors from Brooks County High School in 1984. As a star student athlete, John was highly esteemed and regarded as a “multi- sports star.”  He was a competitive track star and an exceptional quarterback and basketball player for Brooks County High School. He was the 1984 Most Valuable football and basketball player; and won a State Championship for the 100-meter Relay. He was recruited by the great Bobbi Bowden at Florida State University. He received a full athletic scholarship to The University of West Georgia.

A motto and conviction of Coach Strickland was “See It Through.” As a collegiate athlete, he made his mark from 1984 to 1987 as a wide receiver and kick returner at West Georgia. While at West Georgia, “Strick” pledged and was inducted into the greatest fraternity worldwide “Omega Psi Phi Fraternity, Inc.” As a dedicated Que Dawg, he participated and organized various community service programs and served as Chapter President. After earning his Bachelor of Science from West Georgia, he attained a Master of Education in Leadership from Cambridge University, Boston, Massachusetts; followed by an Educational Specialist Degree from Lincoln Memorial University.

For more than two decades, John was a fixture at Fayette County High School. Nearly every year during his tenure as Varsity Coach, the Lady Tigers won 20 games or more, along with nine straight region championship game appearances. During his legendary coaching career he was recognized as Georgia High School Coach of the Year for Basketball and Track; he coached several athletes who went on to compete at the Collegiate and Professional levels.