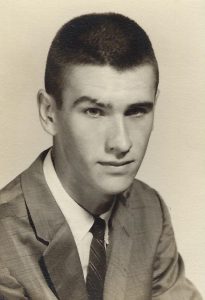 1943-2020–every dash has a story. Life is more than birth–death. It is what you do in the dash. Daniel Henry Graham, age 76, lived life large. With his robust lead voice, he was welcomed into the great heavenly choir on January 5, 2020. Sadly, a three month diagnosis of pancreatic cancer is way too short for such a grand life. A resident of Barney, Dan was born in 1943 to the late Henry Harmon Graham and Lizzie Hall Graham. He worked and retired from Norfolk Southern Railway. He faithfully served on the Brooks County School Board and Brooks County Tax Assessor’s Board for many years. He also was a proud member of the Morven Masonic Lodge and Hasan Shriners Temple. Dan valued hard work, respect for authority, social gatherings with friends and family, gospel sings, a southern fish fry, and cheering on the Dawgs. He always had a joke and nickname for everyone.

He leaves a great legacy of family. He is survived by his wife, Ellen Wood Graham of Adel. Proud father of his two children, Michael (Jessica) Graham and Tammy (Scott) Kelly both of Augusta. Grandchildren include Hannah Kathrine and Henry Graham, as well as, Jon, Caroline, Isabelle, and Graham Gibbs. Step-children include Marty (Christy) Wood of Marietta and Shane (Wendy) Wood of Valdosta. Step-grandchildren are Mitchell, Mason, and Maddox Wood. Dan has one brother Roger (Brenda) Graham, nephew Mark (Laura) Graham, and nieces Cheryl (Nic) Mason and Lisa Graham.

Condolences may be expressed to the family online at www.purvisfh.com. Purvis Funeral Home was in charge of arrangements.